Truly the best service involves giving your servers what they want: power. I believe folks are motivated by a combination of three things:

Let’s face it, servers in America view themselves as fallen angels. I often hear the same stories: “I was on my way to medical school but ran out of money” or “I’m really a real estate professional with some extra time on my hands” or “I’m going to be a famous actor as soon as I get discovered.”  I find that they generally believe they are too good for the position, but can’t deny the quick buck… so they tolerate ignorant restaurant managers and quack efficiency schemes. Servers need to be smart to be salespeople…including even manipulating the manager to get what they want. To get people that smart, they really need to have tripped on the rug on the way to somewhere else so I find that they tend to be selfish, manipulative, and clever. Waiting tables allows them to earn at an almost-professional clip with decent effort-to-reward ratio. Logic dictates that the better servers will gravitate to places with the best ratio (Ron Paul would likely be a better restaurateur than Herman Cain).

A lot of fuss has been made of the Hillstone Restaurant (Houston’s, Gulfstream, Bandera, Hillstone, R&D Café, etc.) Company’s legendary Three C’s: Circulation, Consolidation, and Communication. It’s mind-bogglingly efficient with its calm teamwork, speed of service, attention to detail, and ability to keep dine time low (lingering tables kill profits). Additionally, it cuts down on support staff where the house doesn’t need to pay for bussers and food runners. I could make this blog super long and discuss all of the ins and outs of a Three C’s, but trust me when I say the system is truly BEAUTIFUL to see in action and I would argue that restaurants that do it well enjoy consistency and repeat customers in a documentable, scalable, trainable, and enforceable way. It’s bona fide. 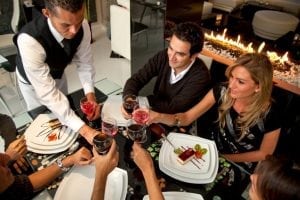 That said, it doesn’t really give servers what they want and it takes constant reinforcement to deliver. In other words, managers are constantly swimming upstream as they have to break a human’s instinct to “serve yourself” in favor of “serving the team.” Remember, servers are motivated by power (see above).  They want to graduate from menial work into a position of respect. When I deploy a circulation system, I create a relatively flat succession system. Sure, there are Lead Server and Server Financial positions that lightly scratch their itch for rank. But these roles come with additional responsibility like holding other servers accountable for doing side work or earning a free meal for doing the manager’s accounting work, allowing the restaurant to save on real supervisory salaries. This militaristic setup ensures a precision dining experience, requiring its own language of commands, responses, and hand signals, but it’s rare to find a management team with the discipline and will to make it a reality. And when it fails, it fails everyone. Let me be clear, I am not knocking Hillstone’s system. On the contrary, I’m praising it… while warning independent restaurateurs around the globe to “not try this at home”. The teamwork model requires big boy pants and Hillstone has them. The average independent restaurant that thinks they can handle this system probably doesn’t understand the effort that went into making this system part of the culture from nose to tail, top to bottom. It’s like putting a Ferrari engine in a Yugo and letting Fred Flintstone drive it.

When a server has an opportunity to achieve status and money, while decreasing the physical burden, they’ll push their head through a brick wall to deliver superb service. You should get them enough bussers to clean their tables for them because they shouldn’t have to clean tables when they’ve achieved the rank of Front Waiter. Train solid food runners, pay them minimum wage, and let the servers tip them cash on the side. Forget elaborate tip share schemes. If they do a good job, they get more money. If they stink, they go broke working for minimum wage. Exempt your top server from side work and let them take more frequent smoke breaks (provided they practically shower before they come back on the floor!). Make the rank clear with clear rewards for performance like better sections, better shifts, more vacation, or a Rolex watch.

Let servers fight it out for the top spots.

There should be a huge discrepancy between your top earner and your bottom earner. Restaurants that have servers who choose table service as a career are the restaurants with the best service. Bussing tables and running food need not be stepping stones to a server position. Career food runners and bussers are critical to any superior service scheme. Whether running food, bussing tables or serving, all of those veterans will starve out the slackers and run them off, and reward the ones who fit in. I’ve worked in plenty of restaurants with both systems and many systems in between. My verdict? You’ll have fewer headaches and better service with career servers who don’t have to schlep dirty dishes or wipe tables, who have to die or retire before someone can take away their rank. The commitment and culture required to implement the 3C’s of the Hillstone/Stepford model is beyond the capabilities of most restaurateurs – and their management budgets – and the staff has to be brainwashed to make it work. It’s either going to cost you in wages for the bussers and runners or it’s going to cost you in management labor to work the cattle prods.