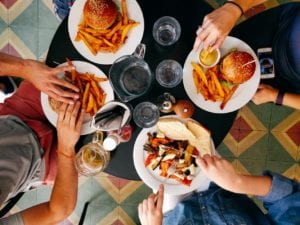 Whether working in a garage, on Wall St. or in an operating room, we all need fuel when we’re away from the nest. Around, oh say 11:30, we want something fast, easy to eat, cheap, and most of all, tasty. Since I can remember, the usual hand-to-maw fare has been burgers, pizza, bar-b-que, fried chicken, or traditional deli sandwiches. Saying we want something new and actually seeking and eating something new are two different things. As Millennials take the gastronomic-direction-setting mantle from Gen X they seem almost completely unfamiliar with the family meal. They’re barely familiar with raw ingredient shopping (I’d say grocery shopping, but today that means visiting a place where prepared foods outnumber raw ingredients) let alone with the notion that the shopping expedition itself wasn’t the end of the hunt/gather process. You still have to turn groceries into a meal. The burgeoning lunch business has crossed into dinner territory.

It has long been accepted that lunch is for your hands and dinner goes on a plate, but former latchkey-kids-turned-adults and the new laptop kids are asking, “why do I need a plate?“ Eating lunch is not really an interruption. When professional image is more about one’s avatar and alias than about clothing, hygiene, and outward appearance, dining becomes about fueling up. However, it is not about filling the gullet. Today, perhaps more so than ever, we watch what we put in our bodies and we want it to be tasty, fast and cheap… and good for you. This forces us to look beyond the burger and the pizza. We’re in luck, however, as burritos, tacos, falafel, gyros, kabobs, and empanadas are giving burgers and pizza a run for the money, forcing them to get better. Good for us right?   Quick serve salad joints like Sweetgreens and Chopt’d are spreading like wildfire while Places like Five Guys and Chipotle offer a freshness element to historically heavy food categories. This emphasis on fresh ingredients, prepared to order, makes it possible for mom and pop to get back in the game. For years, the big chains have emphasized efficiencies in distribution and process as a means to control food and labor costs, but simple menus that specialize in portable, tasty, inexpensive options have leveled the playing field for newbies with a good recipes. 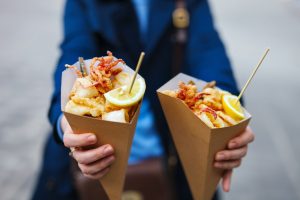 “Hand-food” exists in every culture – essentially some sort of flour or grain based product, mixed with water, baked/fried and filled with meat or meat substitute (pizza is really just an open faced sandwich built on raw dough and all cooked together, if you think about it). Taking a step back, it’s easy to see why street vendors and food trucks have become so popular – every culture has their version of the sandwich. For some reason we think this is an American phenomenon because we’re oh so on-the-go and so important to the spinning of the globe. Maybe not so much. The world gets hungry three or four or five times a day, whether folks are reinventing the world or watching TV. Some parts of the day are supported by cultural/tribal rituals where perhaps Mrs. Cleaver (or her cultural equivalent) create large meals to feed the family… but that’s traditionally been only one (maybe two) meals per day. What about the other meals? At some point someone slapped some leftovers in some bread/tortilla/flatbread so they could wolf it down because mom was punched out for that shift and they inadvertently created the sandwich.

There seems to be no end in sight for hand-food. In fact, if you walk into a Five Guys or Chipotle or a Taqueria at 7pm (when mom and dad are supposed to be making your dinner), you’ll likely wait in a line to get your hand-food… for dinner. As we get used to the idea that there is more to a quick meal than burgers and pizza, it follows that the rate at which Americans mainstream hand-food from other cultures increases. Ubiquitous taquerias are old hat and Indian curry stands, Chinese steam bun shacks, Ukrainian Bikti joints and Alcapulcan Empanada/Tamale joints are likely to garner more attention today than they would have twenty years ago. Chipotle helped us embrace the Burrito as more than something we eat when we go out for “Mexican”. Starbucks helped us embrace the two-dollar cup of coffee, raising the bar on our expectations and making it possible for the local coffee shop to get in the game. So what about burgers and pizza? Sure, they’ll always be there and every time a new culture’s sandwich is introduced to our culture, someone else will re-invent the burger and the pizza. They’ll likely remain the kings of hand-food in our country but we have a long way to go before we stop discovering great hand-food from around the world. The “meat and three” no longer defines what we eat after 5pm and the sandwich is more than a quick bite to eat at midday. It’s becoming what we eat, period.