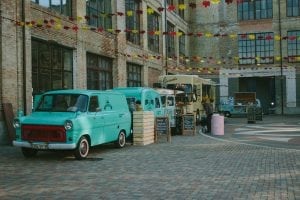 Originally, food trucks seemed to emerge on the scene as a way for chefs without heavy financial backing to open a small, inexpensive, mobile restaurant. Ostensibly, food trucks undermined the traditional brick-and-mortar approach to launching a restaurant business, which included heavy funding, long-term leases and personal guarantees, allowing its creator to focus on the food or food trend.

In the late 2000s, they seemed to be popping up everywhere, but many city codes were not equipped to regulate them. In Washington, DC, most codes were written to manage stationary carts with rules regulating space for pedestrian traffic and proximity to intersections. Few rules were in place for mobile trucks that could park in a parking space, do their business, then leave whenever sales volume died down. Cities like Los Angeles and Austin seemed to embrace food trucks, while cities like New York and Washington scrambled to create rules to head off potential negative impact.

Some of that impact included food trucks stealing customers from restaurants by parking along the curb in front; improper power or mobile kitchen configuration increased the risk of food-borne illness (refrigeration, food prep surfaces, cross contamination, hot and cold holding); and vehicles may not be safe to operate on the roads if equipment and batteries were a mismatch for their suspension or engines. Like restrictions for RVs and their passengers, food truck employees may or may not be properly seated and belted, leaving the exposed in an accident. Or hot grease sloshing around a fryer (that was meant for a stationary restaurant and not a mobile kitchen) could be dangerous.

In some cities, like Savannah, GA, the regulations that affect food trucks come from Highway Safety, Health Department, Zoning, and Historical Societies. We sat in on meetings with would-be food truck owner/operators and the city to get to the bottom of the zoning issues in order to help them gain acceptance by the city. We discovered that each entity was independently in favor of food trucks, but their collective restrictions overlapped in a manner that would only allow existing restaurants to launch food trucks and they could only park/operate in their own parking lots on their property. With no entity willing to budge on their particular restrictions, the city realized they inadvertently had created a no-food-truck municipality.

Some chefs thought the food truck would be a ticket to entrepreneurship from a W-2 job, but the low margins and add on expenses meant they had to work on the truck every hour it operated. Trucks need a place to dump gray water and pick up propane and potable water. The “sell till it’s gone” philosophy means that you want to store enough food to satisfy demand, but you can’t store so much that you carry food over to the next day. Often the leftover food cannot carry to the next day, so the truck must exhaust an area’s sales and then move on to move the rest of the product. This makes labor tough to control. Owners who tried to legislate hours had higher food waste. Owners who said, ”don’t come back until you sell out” ended up with higher labor costs.

With a restaurant in Washington DC, we were able to solve the “owner works on the truck” scenario by opening 5 trucks and a brick-and-mortar restaurant. We embraced the truck image by parking, filling, washing, loading, and unloading trucks out of the back of the restaurant. The parked trucks served as a billboard for the brand. The trucks developed a reputation around the city to legitimize the brand. To solve the labor vs. food cost issue, we turned each truck into an entrepreneurial effort for the truck crews. Truck crews created their own LLCs and rented the trucks from the owner. They’d requisition food from the restaurant and had to pay for it at cost plus a fair profit margin for the restaurant. Truck operators were motivated to sell every bit of food to maximize their profits. Rules were created, similar to a franchise, for uniforms, customer service, operator behavior, parking territories, and food quality. Unfortunately, the owner was not able to stay on top of brand management and operator compliance, so he closed…but not before we proved that a thoughtful restaurant and commissary structure was the way to go.

Today, it’s about predictability. Instead of returning to the “normal” parking space only to find another food truck has gotten their first or spending hours driving around looking for a place to set up, food trucks are banding together to form food truck parks with water, parking, picnic areas and often bands. Costs are pooled or managed by a third-party property owner to lease space. This way food truck operators are getting customers to come to them. They’re also getting on “circuits” or scheduled visits to set up in corporate lots or city centers. In Duluth, GA, for example, there is something called “Food Truck Friday” where controlled rotation of trucks arrive to service a wanting community. Like in any business, the better the owner can predict demand and sales volume, the better they’ll be able to manage it and grow.

We have worked with several property developers who seek to not manage food and beverage operations and, instead, wish to cordon off an area for food trucks. One was a hotel company and another was an adventure park. Neither concept has come to life yet, but it’s interesting to see an interest in food trucks as a means to inject food and beverage into brick-and-mortar operations. Food trucks allow property owners to inject variety while eliminating complexity. We see the current rub being that the property owner wants a piece of the profit…and with many food trucks operating at low volume, the food truck owners still find it more advantageous to stick to food truck parks and special events rather than share the little profit they make with a hotel or theme park.

Do you need assistance with advice on opening a food truck business? We’re here to help! Contact us today, and let’s chat.