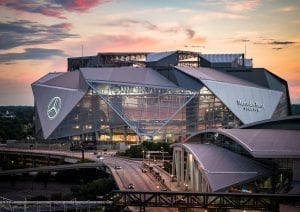 Living in Atlanta, we all heard the buzz coming a year out from the 2017 opening of the new Mercedes-Benz Stadium. “Falcons and Atlanta United FC owner Arthur Blank is making concessions affordable!” The reaction was common: “Hmmm…makes sense. If I am not gouged on concessions prices, I might be willing to attend more games …and bring more family members because I can afford to feed them when we’re there”.  After attending two football games and two soccer matches in two years (two more of each than I attended in the previous two years before fan-friendly concessions) I can vouch for its effect on the city. Butts in seats, raving / happy fans, and a notoriously luke-warm sports city is instantly hot on their sports teams. Phillips Arena in Atlanta (recently re-opened as State Farm Arena… fingers crossed it will become known as “the Jake” after Jake from State Farm) adopted the same philosophy to launch the new Hawks season this year (2018-19) and I see a fuller-than-usual Hawks stadium when the cameras pan back. The trend is catching on as Texas Memorial Stadium in Austin, and Baltimore Orioles and Ravens stadiums have adopted fan-friendly pricing structures. The tickets and parking are still pricey as are the jerseys, hats and foam fingers…but something about cheap food touches a nerve in just the right way. So, what’s that nerve? Can restaurants tap into it?

Nothing sparks innovation like competition…and Mr. Blank seems to have recognized that stadium attendance is competing with 70 inch, 4KHD TV’s and leather recliners. However, food and drinks are tangible and consumable, so they can’t be replaced by pictures or recordings of them. This means that the nerve to tap is VALUE. That’s not to say that the cheapest food wins. Not at all. Almighty Google defines VALUE as: the regard that something is held to deserve.

Consumers are looking at a whole experience when determining if something is valuable to them, not just the price. In the case of fan-friendly concession, consumers seem to really respond to fair food pricing because they can compare it to similar food pricing elsewhere. When the price of food and drinks at the stadium matches the pricing and qualify of food they can get outside of the stadium, then all of the other expensive things (tickets, parking, souvenirs, etc.) seem reasonable too. Grocery stores and gas stations apply this principle all the time. If Bananas at Kroger are $0.69/lb. and the Bananas at Whole Foods are $.99/lb., it doesn’t matter if the fried chicken or the sliced meats are the same price or less at Whole Foods.[1]People will comparatively shop businesses on the things they know, applying their judgement of the common item to the rest of their offering.  Convenience stores know that customers will drive an extra mile or even make an inconvenient U-turn on a divided highway just to save $.01 on a gallon gas.[2]If the store is clean and the gas is consistently cheaper than their competitors, customers will become loyal to the brand. When they choose to buy snacks and other items inside the convenience store, those items may or may not be less expensive, which often goes unnoticed. The key is volume. Volume will offset any losses arising from the discount, if any at all when smartly assembling the assortment.

Haphazardly injecting value offerings or discounts into a restaurant can backfire tragically if the consumer perceives the brand to be “cheap” or that it doesn’t represent their lifestyle, resulting in an identity crisis. I do not advocate discounts or coupons. Instead, the name of the game is to make it easy for consumers to see the value in an offering. Make the value easy to understand and without strings attached. It’s easy to understand inexpensive stadium food… because I know I have to visit the stadium with a full priced ticket to enjoy it. Below are some ideas that restaurants can try:

[1]We studied and implemented this philosophy first hand with gourmet grocers and used it to spur sales for other items.

Do you need assistance with advice on how your restaurant can learn from fan-friendly stadium concessions? We’re here to help! Contact us today, and let’s chat.