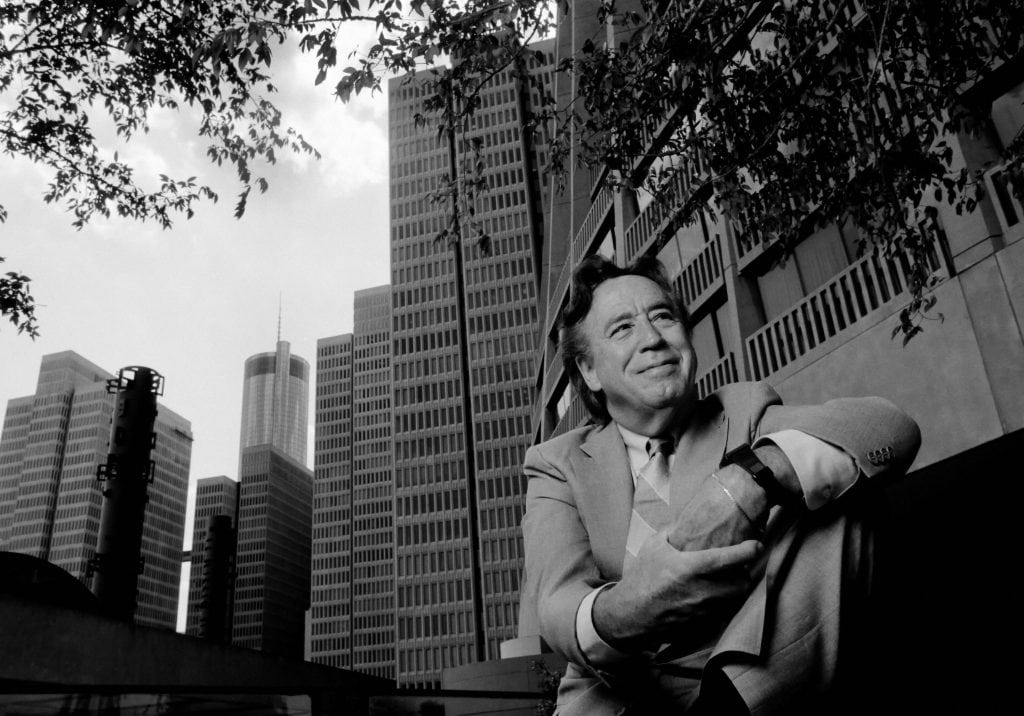 I met John Portman in 2014 on the day of his 90th birthday. He had begun the process of repurposing the 230 Peachtree Tower into office space and a Hotel Indigo. I was in the boardroom with my Blue Orbit Restaurant Consulting team to try and win the right to develop and direct the food service outlets for that building. We won the contract to develop what is now JP Atlanta and for the entire year of 2015, I had the privilege of working along side one of the world’s greatest architects, artists, philanthropists, pranksters and human beings. It saddens me to have lost him at the end of 2017 and I am compelled to share a few tales and lessons I learned during my time with him:

1. Treat Royalty Like Royalty: When the Chairman entered the room, you stood, and you had a seat only after he did. At first, I thought this man must have an ego the size of the room and has surrounded himself with yes men. I later learned that it was just the opposite. John Portman enjoyed a healthy debate and the challenge of new ideas. On many occasions, I found my ideas were just as important to him as his own. He had no use for people without an opinion and he despised yes men.

But on that first day I found myself wondering why I was practically bowing to the “King of Atlanta.” So, I watched and listened closely throughout our first meeting. At 90 years old he articulated his vision for the project eloquently and with a hint of Southern manners. He made eye contact with everyone in the room, treated each one with respect, and took the time to know them all as individuals. The entourage he brought with him was not his handlers and bodyguards, but instead his coworkers and friends. They had earned his respect and admiringly returned it. And from that first day forward I stood when the Chairman entered the room – not because he demanded respect but because he deserved it. In 50 years he had reshaped not only Atlanta, but a multitude of other cities. He had come close to losing it all and held on to build an empire. And yet he connected with everyone in the room and humbled himself to give them the respect he felt they deserved. I am honored to have worked beside him.

2. There is Beauty in a Perfect Eggs Benedict: Eggs Benedict is about as traditional American brunch as it gets. There are conflicting stories about where it originated, but this is my favorite:

In 1942, Lemuel Benedict, a retired Wall Street broker, told the New Yorker that in 1894 he had wandered into the Waldorf Hotel hoping to find a cure for his hangover. He ordered “buttered toast, poached eggs, crisp bacon and a hooker of hollandaise.” The Maître D was so impressed with the dish that he put it on the breakfast and lunch menus substituting ham for the bacon and an English muffin for the toast.

Eggs Benedict was one of Mr. Portman’s favorite dishes. They made it for him perfectly every time he went to Piedmont Driving Club, even years after they had removed it from the menu. This came up early in our menu conversations and I was determined to make sure his new venture served the best Eggs Benedict ever. In fact, a tribute in some manner to the classics became a big part of our menu evolution.

Eggs Benedict sounds so simple. It’s a perfect balance of crisp bread, salty ham, velvet like eggs, and creamy lemony hollandaise. All parts stand on their own until you make the first cut and then the egg begins to run and they all meld together to become one big symphony of taste. While this is not an exact quote, it is the way I remember the Chairman describing an Eggs Benedict to me. A simple dish, comprised of simple ingredients, assembled to inspire wonder and amazement. I think he saw the whole world like that. All people are different and, yet they assemble in different patterns and actions all day long to create motion and music. His world was often one filled with kinetic art.

3. The Devil’s in the Details (or Fifty Shades of Gray): Menu testing and cocktail recipes were coming along nicely. It was time to set the table. I was armed with drawings, and paint samples, fabric swatches, and an actual approved table top. I immediately decided the wood color and grain was perfect, it would be a disservice to cover it with a tablecloth. I ordered in plate samples, glassware, flatware, and napkins and sorted through all of them until I found four combinations that I really liked. I set up an appointment with Mr. Portman, walked my backpack full of breakables across Peachtree Street and set the table four different ways for the Chairman to review. There are so many stories to tell about this meeting and the shopping that ensued but not nearly enough time and too many names to change to protect the innocent. Let’s just say that this was the first time I saw Mr. Portman’s mischievous side and laughed as he “played” with a lot of people during this process including myself. It was fun, and it made me love and respect him even more.

We immediately agreed on china (he even told me I had good taste). Flatware and glassware was close and all it took was one shopping trip to AmericasMart to find the perfect pieces (shopping at AmericasMart is a completely different experience when you are shopping with the man who owns it. People ran ahead of us unlocking showrooms, turning on heat and lights and we looked around at our leisure taking what we liked and making fun of ugly patterns). But the napkin was the devil. Mr. Portman wanted gray to match some gray in one of his paintings and in the chairs in the dining room. However, that shade of gray didn’t exist. Thus began my weekly march to his office with the newest stack of gray napkins. I negotiated with linen companies to source fabric and make napkins, I searched linen companies in France and Italy, I almost considered dying my own fabric in an effort to achieve my elusive gray.

And it did not end with the napkin, he handed me drawings of uniforms he had sketched and said “go get them.” It became a non-stop game called what’s this week’s challenge. Yet, it was all part of helping a man achieve his dream, so it was worth it. And what good is a dream if you lose it in the details. The details are the daily battle, but compromise means you forgot what you were fighting for.

4. Put People First: This may be the greatest lesson learned. It begins with a simple understanding of John Portman’s architectural style. He never envisioned buildings with rooms in them, he envisioned rooms with people in them. And he wanted those people to be delighted and engaged, he wanted energy, but he also wanted comfort. There must be an active city within the four walls but there must also be a place to hide amid it all. He liked to talk about elevators. If you put people in a glass elevator they talk to each other and they smile, and they enjoy the ride. If you put them in an enclosed box, they stare at their shoes until they get to their floor. He knew that buildings meant nothing if they had no life in them and he liked to inject all the life humanly possible.

But more than anything he just felt people were important. He said to me once, “I am still working at 90 years old because my wife gives away the money as fast as I make it.” Few people really know the depths of how much the family has given, but Mr. Portman spent his entire life giving to the success of human beings in every possible way. He was a huge supporter of race-relations his entire life beginning with desegregation in the 60s, backing the “Atlanta, the city too busy to hate “movement, and most recently purchasing the MLK papers to serve as the centerpiece of the Civil Rights Museum.   He was a large donor to the Children’s Hospital and a major backer of the Beltline in it’s infancy. And so much more that we don’t even know about because he was also humble and generous and kind. He did not hide behind his money, he went to work every day, and he shared himself gladly with the world.

In January 2016, I shook the hand of John Portman for the last time. It was at the ribbon cutting ceremony for the 230 Peachtree Tower. The project was complete, and it was time to move on. The room was full of friends and family and dignitaries and once again the Chairman addressed the room and eloquently explained his vision. I shook his hand and told him thank you for the opportunity to work on his project. In my head I also told him thank you for being my grandfather, my obnoxious fraternity brother, my spiritual counselor, and my superhero. And now with his passing, I offer up one last thank you to a man who gave himself to Atlanta and to every person he ever encountered.