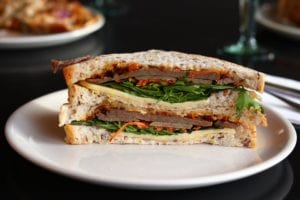 I’m sure that you will agree that sandwiches are the greatest human invention of all time. Simply by putting some food in between two pieces of bread you combine seemingly unrelated ingredients into a delicious, handheld, portable meal. Since the birth of the sandwich, clever and hungry people have been experimenting, innovating, and inventing new kinds of sandwiches in a parade of progress that I hope will never end. Here are some of the latest and greatest sandwich trends out there right now.
Fried Chicken Sandwiches – They’re not new, but they’re everywhere right now, and people love them. Mostly some variation on the fried chicken and a pickle on a bun theme, this sandwich has become as ubiquitous as the hamburger in the last couple of years. It seems that no menu is complete without at least one version of this southern favorite. Additionally, many menus are ditching the boring breast and featuring the more flavorful chicken thigh in their sandwiches.
Breakfast Sandwiches – Sandwiches have broken out of the lunchbox and are taking over breakfast plates. Breakfast sandwiches have proven so popular that they can’t be contained by breakfast time any longer either. As part of a larger trend towards all-day breakfast, breakfast sandwiches are popping out on both lunch and dinner menus. Bacon and eggs are one of the all-time greatest comfort foods combos, so it’s no surprise that people want to eat them any time of day.
Meat Substitutes – Influenced by trends towards healthy food, environmental and/or ethical concerns about a meat-based diet, and technological innovations like the Impossible Burger, the options for a meatless sandwich have greatly expanded. Veggie and bean-based burgers have gotten better, and the demand has increased so that now most restaurants seem to be offering some sort of meat substitute option on their menus as well.
Alternative Breads – There’s way more out there than white, wheat, and rye. Innovation doesn’t just happen on the inside of the sandwich. Biscuits, English muffins, pita, waffles, lavash, and naan are all redefining the term sandwich and expanding options for creative recipes.
World Condiments – Once people fell in love with sriracha on everything, it opened the floodgates to sauces from everywhere in the world showing up on your sandwich. Toum from Lebanaon, zhug from Yemen, chimichurri from Argentina, and gochujang from Korea can all be found dressing up your old ham and cheese sammy.
Though these sandwich trends are now growing, sandwich innovations have not always been without controversy. The hot dog has been around well over a hundred years and people still fight over whether or not it’s a sandwich. Our best advice is to worry more about how it tastes than what it’s called, and of course, make sure that it’s making a profit for your restaurant.

Do you need assistance with advice on current sandwich trends for your menu? We’re here to help! Contact us today, and let’s chat.