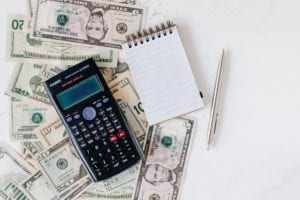 A few weeks ago, my wife and I ate San Francisco. A recurring line item on our checks was “EE Benefits Surcharge” or “SF Mandates” charge. My first reaction was, “hey… why do I have to pay for employee benefits…isn’t that the restaurant’s problem?” It got me thinking about the whole idea of cherry-picking line item costs on a Restaurant’s Profit and Loss statement and presenting them to patrons as something they should pay for on top of the price for their meal. For restaurants, the two add-on, employee related charges that are showing up on guest checks in different markets are:

As restaurants try to find new ways to stay competitive, I fear these kinds of add-on charge strategies will keep cropping up. Whenever I ask a non-restaurant person their opinion on folding tips into wages and just charging more for the food, the reactions are remarkably quick but fall into one of two camps: “Just fold it in, I’ll pay it…I’d love to not have to deal with tipping” or “No way! I’ll decide how much to tip and if the service stinks I won’t pay as much”. The ideology probably runs along party lines – tax-and-spend vs. trickle down.

I am similarly quick with my response…until I think through it. After a lot of thought, I finally have a stance…and like all good legislation, it is moderate. When I buy a cart (or “buggy” as we say in the South) of groceries at the grocery store, I don’t see a line item expense for employee health insurance – disguised or overt. I assume the business will charge me an appropriate price for my apples or Bounty paper towels to cover their costs – labor included. As incentive to keep me shopping there, the grocery store must adopt wage ranges, man power planning, operating systems and a management structure that controls costs so that their banana prices remain competitive, lest they lose me to a competitor charging $.15 less per pound. Sometimes the business may accept lower profitability by eating costs to give guests the best deal possible (as a means to maintain popularity). Sometimes they sell common items at a highly competitive price only to gouge customers on prices that are not so recognizable once they go into the store. Convenience stores are well aware that customers will do a U-turn to save $.01 on a gallon of gas and won’t notice to the fact that the donuts and coffee are $.50 more. The rest of the time (if not most of the time), the business attempts to maintain higher profits by delivering the highest quality possible while paying as little as possible for the labor and the ingredients. This is normal and works for retail stores and manufacturing plants. Production or retail selling ingenuity is rewarded.

But the hospitality industry is not the same as they share components with retail and manufacturing. Restaurants, by nature, are generally experiential where the commodity sold is as much service as it is the meal itself. This has created a culture of tipping so successfully that it is supported by states legislation through a tip credit against minimum wage – the practice of anticipating tips as enough of a legitimate expectation, that, so long as restaurants track them and ensure the base wage + tips ≥ minimum wage (and adjust the employee’s pay if it isn), everybody’s happy. 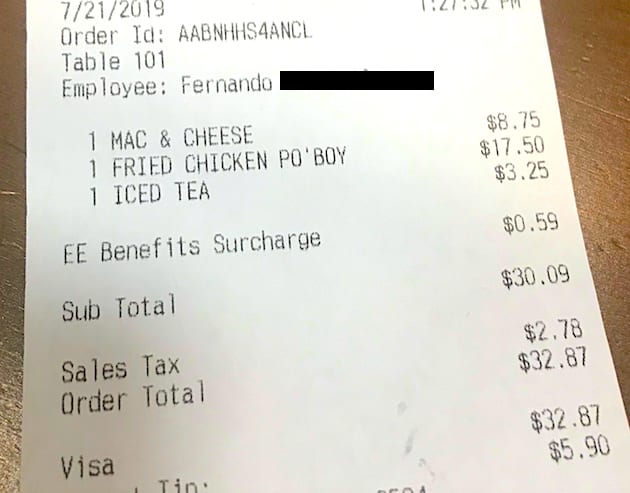 A lot has been made of Danny Meyer’s 2015 foray into eliminating tipping in his Union Square Hospitality Group restaurants (Grammercy Tavern, Manhatta, Porchlight, Blue Smoke, etc.). It was a big deal and caused a stir among employers, employees and customers alike. Tipped employees were skittish about forgoing tips in favor of a set wage. Employers were worried that customers would freak out over the increased prices on the menu and defect to lower priced restaurants for a similar experience while failing to do the math showing they’re paying the same price after tip. Customers were worried because they feared that, without the inherent service quality incentive of tipping, which some say comes from a 17th century English acronym for “to insure promptitude” (which I think sounds like hogwash), service would revert to something less inspiring, like the counter service experienced at the local DMV or a Walmart. In a 2017 Business Insider article, Mark Matousek shares Meyer’s argument that, “the practice [of tipping] lets restaurants get away with paying servers insufficient wages”. Despite good intentions and the industry-disrupting possibilities, the policy has been a difficult for Mr. Meyer to weather…but he’s sticking to his guns and pushing through the calculus. The forecasted friction points became reality for USHG and we’ll see where it goes, but I applaud Mr. Meyer for tackling a tough issue head on (hell, I’ll eat all day long at a Danny Meyer restaurant if for no other reason than he is driven by something higher than just profit). It’s a bit like The Affordable Care Act: it didn’t launch perfectly…and closing the gap between success and failure often looks less attractive than aborting the pursuit altogether. Meyer – like Obama – swam half way across the river and got stuck…go back or keep going?

I do disagree with Mr. Meyer when he implies that restaurants are trying to get away with something by taking advantage of the tip credit…as if it’s a sinister plot to defraud employees. To charge lower prices and remain competitive, restaurants are inviting a segment of their employee populations to take part in – and benefit from – the entrepreneurial spirit. The more competitive the prices and the better the service, the busier the restaurant…and the busier the restaurant, the greater the opportunity to earn higher tips. To boot, service employees can work part time and still earn a good living, which makes it an ideal job for college students as the real money to be made is after business hours and on weekends when students are not in class. Servers can make $150 to $350 a night in quality restaurants. For a 7-hour shift that’s $21 to $50 per hour…and the server has a great deal of control over what that number is based on the quality of their service. Giving someone the opportunity to make more money than they could for a static hourly job is not what I consider exploitation.

It has long been an acceptable practice for restaurants to add gratuity to catered events, banquets and parties over 6 and no one really says anything. Servers still work hard and can deliver great service, which begins to debunk the earlier concern that servers will revert to DMV-style service if not held in check by tipping. Indeed they are gunning for tips on TOP of the auto-gratuity, so perhaps that’s the key…to charge for it…but to show it on the bill as a “minimum gratuity” (so the $22 Chicken Marsala can remain $22) and let customers add extra for great service, regardless of whether the party is large or small. Since implementing his no-tipping policy in many of his restaurants, Danny Meyer has experienced high turnover, disgruntled employees and irritated guests, which forces him to explain his actions to both sides through PR. Anything that requires that much PR to get people to see things your way is bound to cause problems. Taking away guns (period), to me, is a good idea but it has been proven over and over that we’re in for a long hard fight that will not evolve. A softer stance is needed. Most people on both sides agree that we should know who has guns and keep them out of the hands of people that cross a line that everyone agrees shouldn’t be crossed (such as convictions for violent crimes or mental illness). Similarly, I believe we can moderate the tip issue by letting restaurants keep their competitive wages but add a line for an acceptable, industry standard tip, while allowing additional tip to be added (as a line item, transparent for all to see). For example:

This solution, I believe, will require some legal finagling as the language of gratuity vs. service charge is sticky. It’s currently not up to restaurants to add gratuities and service charges in some states…so there is probably some lobbying that needs to happen. Figuring it out is a win for restaurant, restaurant employees, and their customers.

The other issue I mentioned – the health care surcharge – like San Francisco’s Health Insurance Benefit – is a line item that restaurants are free to add to a check in some states.  According to a 2018  San Francisco Chronicle article by Jonathan Kauffman, the city of San Francisco passed a law called the San Francisco Health Care Ordinance, which later evolved to the Health Care Security Ordinance (HCSO). Everyone likes to beat up San Francisco for being socialist or hyper-liberal but I actually like that they are forcing businesses to do what employers should do: provide health insurance. The Affordable Care Act forces employers with over 50 employees to offer health insurance to its employees while the HCSO lowers the threshold to 20 employees. Regardless, it’s a step forward, in my opinion, to helping restaurants and hotels become more respectable professions. My in-laws were distraught and saw me as a leper in 1986 when their youngest daughter brought home a restaurant cook …even though I went to America’s top culinary school (The Culinary Institute of America) and got my BBA in Hospitality Management from JMU [my secret mission in life is to remove the stigma attached to hospitality careers and attract more talent through changing perceptions of them in America]. Whether or not making restaurants and hotels better places to work is relevant to this discussion, I do believe that employee benefits are a line item on an income statement. Unlike the service charge or gratuity (which are pass throughs…the restaurant collects it and pays it out in one move so it never actually hits the P&L), employee benefits are part of the recipe for being an “employer of choice” …which fuels better service and better food (its prepared with love), which fuels better sales and higher profits. In the beginning of a restaurant’s life cycle, because restaurants have to break in and essentially steal market share from competitors, the owner has to take it on the chin through accepting lower profits. This is an investment in future business. The truth is that so many restaurant start-ups are under-funded and don’t revere the employee experience enough. They try to get away with the smallest labor cost as possible. They do the same with cost of goods, hawking inferior quality ingredients and delivering an inferior quality guest experience (have you ever heard that restaurants have a high failure rate?…THAT’s why…it’s called “under funding”).

I agree with San Francisco’s HCSO, but I disagree with restaurants that add it as a line item on guest checks. It’s a cost of doing business and restaurants need to run a tighter ship to make sure they can afford the health insurance. If they can’t make it work, they need to look in the mirror: be more compelling, stop winging it with no or poor systems, or get out of the business. For sure, restaurant owners should be happy with any profit under 20% of Sales (net of tax). Show me a restaurant that is delivering more than 20% to the bottom line (except for large chains that have done the hard work of expanding their brand to leverage purchasing power, marketing and volume) and I’ll show you a restaurant that is exploiting employees or hoodwinking guests…or both.

Do you need assistance with advice on restaurant surcharge options for your restaurant? We’re here to help! Contact us today, and let’s chat.